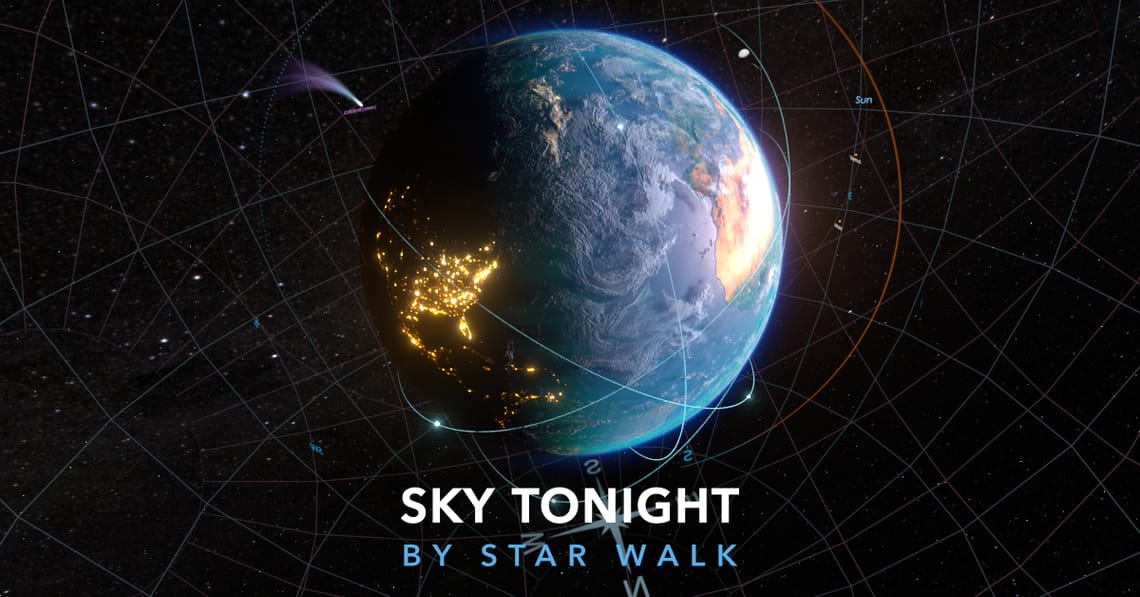 Your stargazing app is lying to you. Sure, it can show the names of the star, planet, or constellation you’re pointing your smartphone at. It might even tell you when the International Space Station is flying over your exact location. What it won’t do is let you know what parts of the sky you can actually see from where you’re standing.

That’s where Sky Tonight comes in. Free to download, this new app from the makers of Star Walk 2 has a powerful ‘augmented reality’ (AR) mode that overlays its map of the sky on the surroundings using a smartphone’s camera. It’s hugely useful because wherever you stand to observe the stars – whether that’s with the naked eye, a pair of binoculars, or a telescope – things get in the way. If you’re in your own backyard, it could be the back of your house, a tree, or even a streetlight that blocks out the stars in its vicinity. Either way, you’re going to have obstacles that prevent you from finding objects in the sky. Sky Tonight’s main screen has a button on the bottom-right that allows you to toggle between a basic AR mode (that simply shows you a map of the sky that changes as you move your smartphone) and a view through your camera that overlays that map on your immediate surroundings. It works in the day as well as the night, so as well as seeing which objects you can consider pointing a telescope at (and which ones you have no hope of seeing despite them being ‘up’), you can do the same for solar and lunar eclipses, sunrise and sunsets, and moonrises and moonsets, too.

It’s an incredibly useful feature that’s of practical use to all astronomers when they’re observing, but there’s a lot else to like about Sky Tonight. Like any stargazing app, it uses your smartphone’s GPS location on the planet and your smartphone’s accelerometer. You can see exactly what your night sky looks like right now, and you can easily change the date and time to see what will be visible from where you are at any time on any specific day in the future (and even in the past).

Another real standout on Sky Tonight is its interactive object trajectories feature. In many ways, it extends the usefulness of its AR mode by informing the observer precisely how their target object will appear to move for the rest of the night. That’s extremely helpful if an object is rising, but destined to go behind a building at a particular time. Instead of waiting until that object is in a darker area of the sky, and thus easier to see, you can get the observation done before it disappears from view. It also works really well for objects in the southern sky, which from the Northern Hemisphere appear to rise up into the sky and then sink again, sometimes relatively quickly. The selected object’s trajectory is shown as a thick line that represents its journey so far that night and a dotted line that shows where it’s headed for the rest of the night (or day). For the latter, not only do you get roughly hour marks in the default view, but precise positions for each minute if you pinch to zoom in.

The information Sky Tonight makes available for each object is impressive and exhaustive. Tap any object – be it a star, a planet, or a nebula – and an ‘i’ button brings up a three-part guide; info, figures, and events. ‘Info’ comprises a table of facts and figures above an introductory write-up about the object, which is brief, well written, and original. ‘Figures’ displays its specific positioning data – including its RA (right ascension) and DEC (declination), its visual magnitude, and its apparent diameter, while ‘Events’ details upcoming visible passes and events, such as conjunctions. For each, only the next couple of events are displayed; tap ‘View all’, and you can access exhaustive lists of events for the next six months and beyond. The only catch is that the free version gives the user only the next three events, with premium access unlocking everything else.

There are other features that make Sky Tonight useful for planning observation sessions. Back on the main home page – which puts the sky map front and center – you can quickly access a ‘Visible Tonight’ page that shows you what’s up, when, and a ‘Stargazing Index’ complete with an hour-by-hour weather forecast. You can also easily access a monthly events calendar that’s presented as a visual grid of dates. Lightly touch any day, and it will give you some key events for the day – perhaps a meteor shower peak, a conjunction, or a planet coming to opposition – but always with the Moon phase included. There are versions of this calendar dedicated to meteor showers and the Moon, too. Click through to a particular day, and you can also see the exact times of sunrise, sunset, moonrise, moonset, and twilight (civil, nautical, and astronomical). You’ll also get the day length and the duration of total darkness. For each event, you can click through to another page that will show you the exact time it will be best observed from where you are. You can even share this information to messaging apps and social media as a square image containing a graphical representation of the event and the time it will look best. Events can be saved to create an observing list, complete with notifications so you can never miss a conjunction, a meteor shower peak, or a lunar eclipse.

However, what I love most about Sky Tonight is its design. It’s modern-looking and minimalist, which is quite an achievement given how much information it holds. It’s also brilliantly designed to be used with one hand. The bottom navigation bar is a thing of wonder; it’s low on the interface, but can be swiped up using a thumb to reveal all manner of useful features. There’s a slider that limits objects by brightness, configuring the app’s view for naked-eye, binoculars, and telescope viewing. Ditto a light pollution slider (though that’s more difficult to judge). On this bar, you can also toggle between three choices for how constellations are represented, overlay celestial coordinates, and activate the red light mode to save your night vision (highly recommended).

Bottom Line: Highly polished, easy to use with one hand, and loaded with practical features for sky-watchers and amateur astronomers, Sky Tonight sets a new benchmark for stargazing with a smartphone.

About the Author: Jamie Carter is an experienced science, technology, and travel journalist and stargazer writing about exploring the night sky, solar and lunar eclipses, moon-gazing, astro-travel, astronomy, and space exploration. He is the editor of WhenIsTheNextEclipse.com and the author of "A Stargazing Program for Beginners: A Pocket Field Guide" (Springer, 2015), as well as many eclipse-chasing guides.