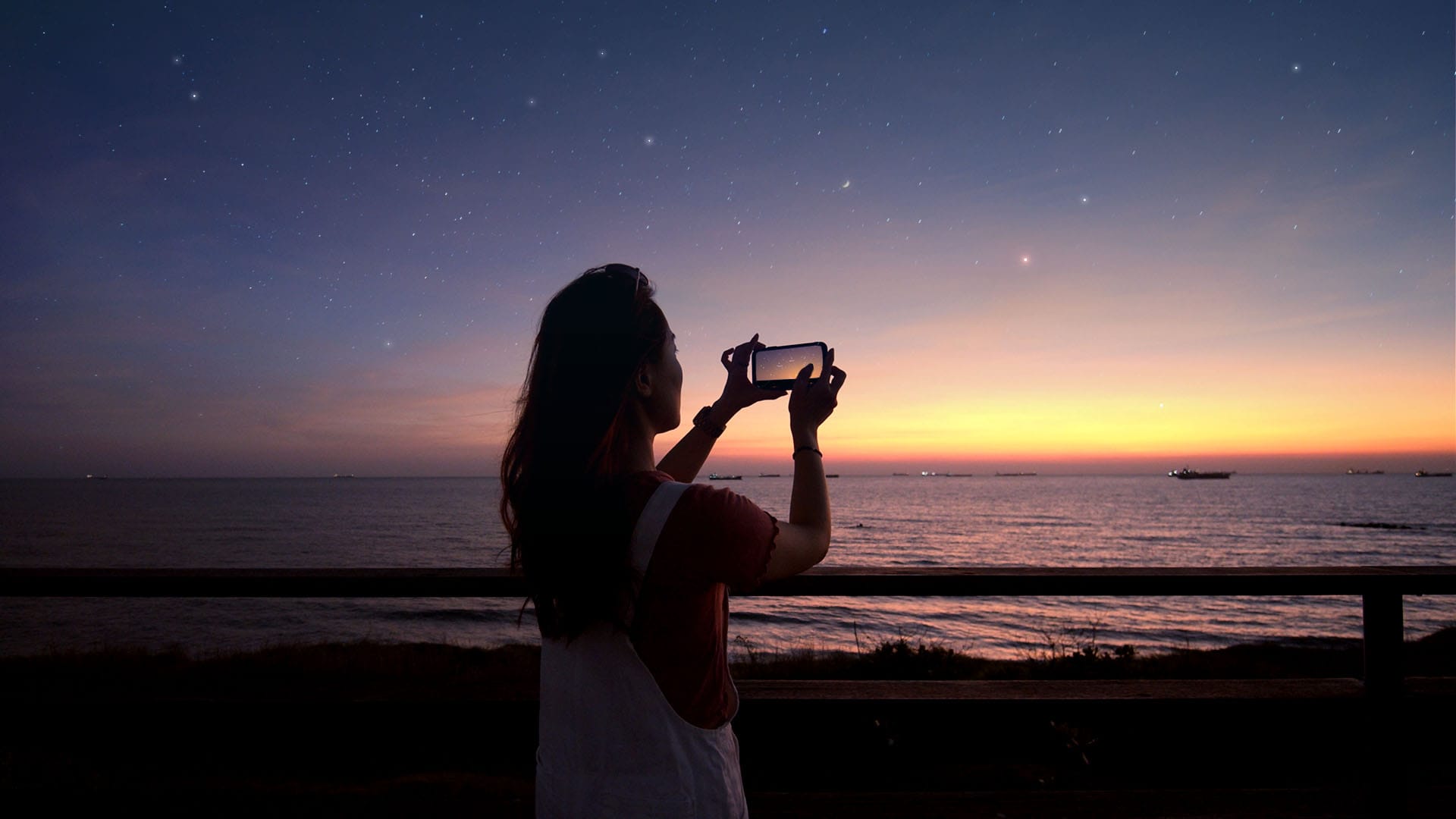 What are the best stargazing apps? What’s the difference between them? Are they free? In this article, we’ll answer all these questions and review each of the most well-known sky maps for mobile devices.

There are dozens of stargazing apps reviews on the internet, however, most of them are out of date or contain irrelevant information. As developers of several popular astronomy apps*, we’re interested in knowing how other stargazing tools work; in this article, you’ll find our opinion about these tools.

Here is how this article works. In the apps’ descriptions, we’ll focus on the free versions to see what’s available for most users. All the money-related information is in the Basic Info section. There you’ll learn whether an app is free, offers additional purchases, or contains a free trial to test all features.

The Main Criteria section includes our personal ratings. We tried to be objective, but different users may have different opinions on the apps’ appearance, convenience, and other factors. To bring more objectivity to this review, we also evaluated the number of free space objects available in each of the apps. We obviously can’t test all of them as there are at least several hundred of them in each app. So we chose 10 well-known or trending celestial bodies of different types:

A relatively new Sky Tonight is the ultimately useful tool for exploring the sky: nothing extra, just the features you need.

Sky Tonight has the biggest free database of space objects on our list — you can find any object without paying extra. If you don’t have a particular object in mind and just want to browse the night sky, the app provides a list of events and space objects visible from your location. Moreover, the app predicts whether a night is suitable for stargazing based on the lunar phase, light pollution, cloudiness, sunrise and sunset times. It even has a built-in weather forecast so you don’t switch between several apps while planning a stargazing night. The app offers astronomy articles where you can learn how to view upcoming stargazing events. In addition, Sky Tonight allows you to set customizable notifications. You can get a reminder for a passing of the ISS, Moon-Venus conjunction, or Jupiter reaching a certain point in the sky.

The app's only downside is settings placement. All settings are divided into three sections, and you might need some time to realize which section contains the setting you’re looking for.

As for the subscription, Sky Tonight has an interesting system: its free version doesn’t limit the number of space objects or available tools. Instead, the app’s content is partially blurred, so you can see only the first three items in each tab. It doesn’t ruin your stargazing experience but might be annoying.

Overall, Sky Tonight is the best free option on the market for both beginners and advanced observers. It gives you free access to the entire database of space objects, contains all the necessary features for planning a stargazing night, and has a nice clean design.

Sky Guide was a paid app until recently; now, you can get the base version for free. However, many features are hidden behind the paywall — even some constellations need to be bought. You can upgrade the app via different subscription options; the cheapest one will unlock some space objects, all constellations, 100x zoom, stargazing forecast, and more.

Sky Guide is an excellent app if you’re a fan of minimalistic design and ready to pay even for basic features. The free version features a shortened list of space events, quick access to your favorites in the search tab, astronomy news that includes stargazing events, and advanced astronomy-related information.

This mobile version of the well-known desktop app is available for free only for Android users; the owners of the iPhone have to pay 9.99$. However, for this price, you’ll get the PLUS version of the app, which already includes additional features such as the telescope control, entire database, landscape simulation, 3D models, and more. The free Android version doesn’t have all of these — it presents a basic sky map without augmented reality, a decent amount of space objects, and the sky cultures feature. It shows what star patterns people from different regions of our planet saw in the sky and what they called the modern constellations.

Even the most basic version of Stellarium allows enjoying the night sky and locating space objects. While it doesn’t have extra features, it manages to be easy to navigate and informative. You won’t find an astronomy calendar or stargazing conditions there, but you’ll be able to find planets, constellations, and more.

Night Sky X is quite an interesting app that offers unique features for free. For example, it has an astrophotography option, astronomy quizzes, sky tags, an education center that contains educational material for different ages, allows you to add notifications for future events to your iPhone calendar, and shows planetariums nearby. The app also has a good free database and all “standard” features, including news, stargazing conditions, and space objects visible tonight.

The annoying thing about Night Sky X is the interface control. The map is shaky and moves too fast from the slightest touch — to fix this, you need to set a touch sensitivity in the settings. If you feel that the sky map is too overwhelming, you can also change its appearance in the settings. However, it’s quite hard to make the sky map in the app look like the real sky.

All in all, Night Sky X feels more like an educational tool. As for the sky observations, if you have time and patience to understand all the app’s features, you’ll find it useful and interesting. If you just want to browse the night sky and identify the space objects, it’s better to look for another app.

SkyView Lite stands out from the other stargazing apps on the list. Firstly, it has a basic design where nothing distracts you from the sky. Secondly, it always follows your movements, and you can’t just scroll the sky map. This decision is arguable — we’re not fans of it, but we can assume that sometimes it can be useful.

SkyView Lite also has a unique feature. In the middle of the app’s main screen, there is a target icon; when a space object crosses it, SkyView Lite recognizes and captures it. The name of the captured object appears on the screen, and a second later, its trajectory also appears. However, you need to be very precise — the app easily loses focus on a target. By the way, if you tap on any object, you’ll be able to move your device along its trajectory and see its position at different times.

We also noticed that the app’s interface differs on iPhone and Android, and on the latter one, it’s way less convenient. For example, on iPhone, the menu opens on the main screen so you can turn on/off the camera and night mode there, while on Android, you need to open the menu, go to the settings and manage the features from there.

SkyView Lite is a great app to quickly identify a sky object. The app won’t tell you the best way to observe it — SkyView Lite doesn’t feature stargazing news or a calendar section; instead, it focuses on visible objects.

SkySafari is available for free only on Google Play; the basic version is 2.99$ on the App Store.

When you open the app for the first time, you feel a little bit lost because of the overwhelming sky map that tries to show you all the space objects at once. However, the app is very customizable — you can adjust pretty much anything, starting from the planets and Moon displaying to the deep-sky objects’ intensity. People with poor eyesight may find it helpful that you can change the font size. In addition, you can save multiple settings files.

SkySafari doesn’t feature stargazing news, but the app contains a lot of information about space objects. By tapping on a planet, you’ll learn interesting facts, mythology, and culture-related details about it and find some interesting pictures. SkySafari also presents a calendar of events (which, for some reason, was empty for February 2022).

Note that the app downloads a lot of data on first use, so you need to get Sky Safari in advance before going for stargazing somewhere without an internet connection.

SkySafari is a good free option for stargazers with at least a little observational experience who know what they need from an astronomy app. As it doesn’t have an augmented reality feature, it might be a bit hard to identify space objects.

Star Walk 2 has one of the most impressive visuals among other stargazing apps. Its beautifully designed star map and calming music will help you immerse yourself into the world of astronomy.

Basically, Star Walk 2 explains when, where and what to see in the sky. The app has the Visible Tonight section that contains space objects visible on any specific night from your location and the Sky Live tab that shows set and rise times for the Sun, Moon, and planets. It also offers the astronomy news section, where you’ll find articles about stargazing events visible these days.

Star Walk 2 will fit beginner stargazers who have little knowledge of space objects but would like to navigate the night sky. Its paid add-ons are suitable for educational purposes as they contain planets atlas, their internal structure, space missions, and space cartoons that explain the astronomy basics for kids and adults.

This was a review of the seven most popular stargazing applications of 2023. Each of these apps fits particular goals and has its own pros and cons. What astronomy app do you enjoy? Share with us on social media, and we might update this article and add a review of your favorite app.

To find more astronomy tools, check out our list of top 20 stargazing apps.

*We’re Vito Technology — a mobile app development company that creates awesome high-quality digital products, mostly stargazing and astronomical apps. There are more than 20 million users in our applications: amateur astronomers and newcomers, students and professors, stargazers and photographers, kids and adults. Vito Technology has a number of awards, including the Apple Design Awards, the Best app of the year from both App Store and Google Play, and others.